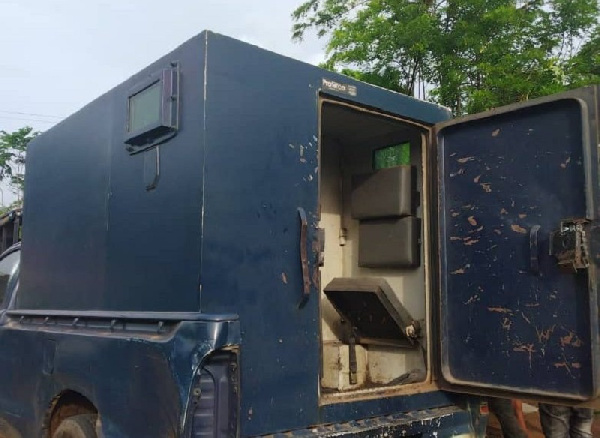 In the midst of sporadic firing, two armed robbers robbed a bullion truck worth more over GH107,000 in front of a supermarket in Tarkwa, Western Region, yesterday morning. The burglars were alleged to have followed the bullion van, which arrived at the Ransbet Super Shopping Market about 9 a.m. to collect the weekend sales and deliver them to the bank. One of the thieves was alleged to have disguised himself as a shopper carrying a pistol.
There were no casualties as the armed guys plundered at their leisure. The Western Regional Police Command acknowledged the event and stated that an inquiry was underway
The manager of the supermarket, Ms. Mabel Dzedu, said the bullion van arrived at the premises of the supermarket without a police escort.
“The robber first entered the cosmetic shop and walked around for a while and then picked a drink and other items, paid for the items at the counter and waited for the items to be bagged,” he said.

Images from the shop's CCTV showed that after the cashier on the Mon-Trans bullion van took the money from the supermarket and was about to put it in the bullion van, the robber — who was inside the supermarket — charged on the cashier, snatched the money, and walked away to sit on the motorbike, which was being driven by the other robber, and sped away.
Ms. Dzedu said Mon-Trans was contracted to carry money from the shop to the bank on a daily basis.

“When the bankers arrived, the team went through the process of counting the sales and after the transaction was completed, they carried the money towards the waiting bullion van,” she said.