The discipline of the highest calibre. Disgraceful behaviour that spews disgrace and a poor moral upbringing.

It appears that these young Senior High School students are unaware that indecent exposure in the public domain is punishable by law, as they engaged in the open play of a very serious offence, violating the school's acceptable conduct and violating national laws.

In a video shared on social media, the students were seen engaging in a hot afternoon entanglement at the back of the school's boys dormitory, with no fear of being caught during class hours. There is no regard for their education, only blatant irresponsibility. 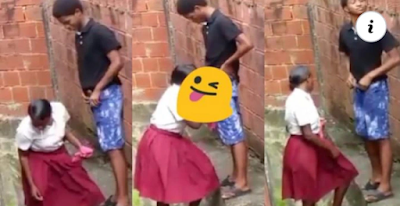 It seems s*x and other romantic games mostly meant for married couples have made their way to supposed “future leaders” of our country as a young girl was seen recently s**king a male colleague.

The indiscipline amongst students has become rampant as Senior high school students have become the Topic for discussion these past weeks as videos show them engaging in immoral acts.

This time around, it has gone to the extreme as a female student is seen s**king her male college student who is seen in the video standing and watching out if they were being seen by anyone.
WATCH FULL VIDEO: