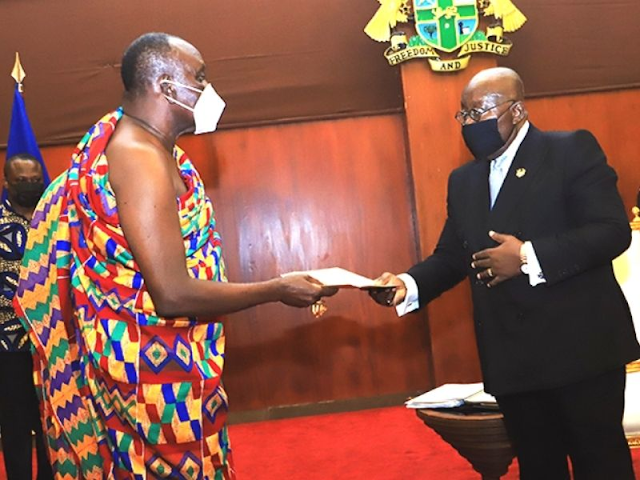 The fate of Chief Justice Kwasi Anin-Yeboah is in doubt because there is no clear indication of whether a prima facie case was established in a petition to the President to have him investigated over the alleged $5 million bribe.

Last Friday, the Council of State, led by its Chairman, Nana Otuo Siriboe II, visited Jubilee House and presented a report on the petition to President Akufo-Addo, who had asked them (the Council) to advise him (the Prez) on the matter.

The Presidential Press Corps was permitted to attend the first part of the meeting, but the second session was held behind closed doors.

“I know you have formidable jurists in your midst, so the necessary guidance that the rest of you, the lay men in the Council of State had, including the archbishop and others, that guidance has been well given,” President Akufo-Addo stated.

He expressed gratitude to the Council for their intervention and assured them that he would carefully review their report. According to him, the case law that had been the understanding of Article 146, Adjei Twum and others versus the Attorney General, required him to consult with the Council to determine whether the petition that had been sent to him raised some prima facie case warranting the establishment of a committee.

A lawyer, Mr Akwasi Afrifa, claimed that the Chief Justice demanded a USD$5 million bribe from his client, Nana Ogyeedom Obranu Kwesi Atta IV, in order to influence his case before the Supreme Court.

The Chief Justice denied the allegation and directed that the case be investigated by the Police Criminal Investigations Department and the General Legal Council.

According to the law, the President had no choice but to refer the matter to the Council of State to determine whether or not there was a prima facie case against the Chief Justice that warranted further investigation or his removal.