The Ghana Police Service has interdicted three policemen for their alleged involvement in the death and secret burial of a 48-year-old man, Abu Bukari Bahala, at Seikwa in the Tain District in the Bono Region.

In addition, the Bono Regional Police Command is currently searching for a man identified as the Akyeamehene of the Seikwa Traditional Area, Opanin Asuman, who is suspected to have assisted the policemen to bury Bahala.

According to the police, they had been interdicted following ongoing investigations into the unfortunate incident.

The three policemen and two security men of the Nkoranman Rural Bank — Rubin Obeng and Aaron Abey — are alleged to have brutalised Bahala to death and buried him secretly at night to cover their crime.


The Bono Regional Crime Officer, Superintendent Kennedy Adusei, who confirmed the incident to newsmen, said the three policemen and the other people named in the incident had been invited to assist the police in their investigations.

Supt Adusei explained that the initial report was that on Friday, April 16, 2021, the Manager of the Nkoranman Rural Bank, Mr Emmanuel Ofori, reported to the police that Bahala, a lunatic in the Seikwa community, had smashed the windscreen of his vehicle, with registration number AS 2000- X.


Supt Adusei said police investigations revealed that after Bahala had smashed the windscreen of the said vehicle, Obeng and Abey, along with others, attacked and beat him mercilessly, before sending him to the police station.

He said at the police station, Bahala was violent, compelling the policemen to push him to the compound of the rented police quarters, where they managed to handcuff him.


Supt Adusei said later, the police realised that the deceased had become weak and was rushed to the Seikwa Health Centre for treatment but was pronounced dead on arrival.

He said going by best practices, Chief Inspector Aforo should have known better by preserving the body at the mortuary for autopsy.

“When such things happen, a policeman is supposed to send the body to the mortuary for preservation and autopsy, but the opposite happened,” Supt Adusei stated.

He said Chief Inspector Aforo explained that Opanin Asuman, together with some boys, had assisted him to bury the deceased.

Supt Adusei said when rumours went round in the community about the incident, the culprits realised their mistake, exhumed the body and sent it to the mortuary.

He said all those involved in the case or contributed to the crime had been sent to the Sunyani Police Headquarters for interrogation, explaining that investigations were ongoing.

Supt Adusei assured the family of the deceased that everything possible would be done to ensure justice for the deceased.
Source: Graphic Online 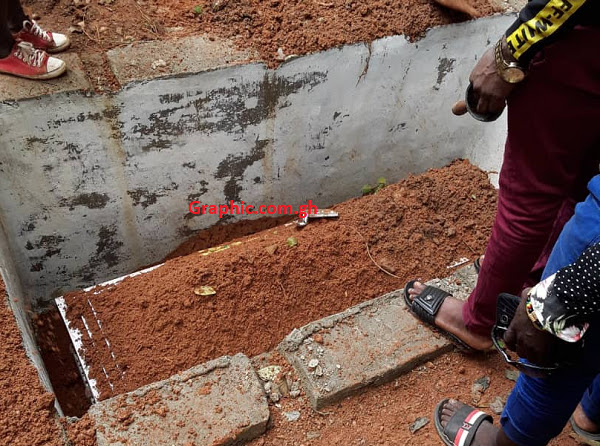