31-year Old man Ran Away on his Wedding Day at Pempso, Bono Region 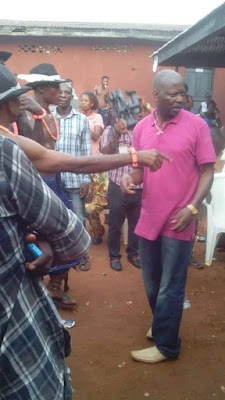 Marriage which is a sacred geometry between a man and a woman, has been called off after a confirmed allegation from the wife of the man, was heard. Anthony Brakye who was supposed to get married before 7am yesterday, has not been seen, after his alleged wife stormed the wedding with her two children. Anthony and Araba was to become a husband and wife at Pempso, in the Bono region, but couldn't exchange the sacred covenant before the alleged first wife stormed the wedding.

Araba is a teacher in a public school at Akropong, in the Eastern region. Araba met Anthony when she started her teaching practice in 2018. The two became friends and grew from friendship, to potential married couples. Araba accepted the words of Anthony, and took him home in 2019. Anthony who is a Bus Driver with one of the famous commercial transport union in Ghana, took Araba to a family house he had paid for. Everyone in that house, was paid by Anthony to act as his relative, in order to secure his marriage with Araba. Araba became convinced that she had met the right man, the man she had been praying for all these while, and agreed to the marriage in 2019.

The initial marriage was scheduled for June 2020, but it was rescheduled because of the deadly illness, and the lockdown. Anthony and Araba had since been living peacefully in Akropong, where Araba teaches. Anthony comes home every two weeks, mostly on weekends because, of his profession. He drives a Grand Bird bus from Kumasi to Accra, and vice-versa. He mostly spends his resting place at the station, that was the usual story, he Anthony, told Araba.

Not knowing Anthony had a wife whom he hasn't divorced, and two children all in Kumasi. Anthony has been having nightmares with his wife, and decided to marry another one, but he failed to divorce the first one. The woman who stormed the marriage ceremony of Araba with her children, made it known that, it was her who got Anthony the job he has now. He was unemployed when she met him, and she went pleading with several offices, before they decided to offer Anthony a job.

She told Araba that, though she has been having troubles with Anthony, but he never told her he was tired of her. All the problems she has been having with Anthony, was all because, he hasn't been spending time with them ever since he started his bus driving. The same job the wife got for him. Anthony was at the family house of Araba in Pempso, with his hired family members and a true sibling of his, when the first wife stormed the marriage. Araba was still in the room waiting to be shown to the marriage grounds, when Fafa, the wife of Anthony made a scene.
Someone called her and made her understand that, her husband was about to marry another woman. She Fafa, did not believe it until she saw everything this morning. Anthony after seeing Fafa at the marriage, took to the opposite direction, and nobody has since seen him again. Family of Araba are in shock as to why Anthony will want to do that to their daughter. Fafa was still at Pempso, at the time of this post. The marriage was a traditional marriage and it was to start at 6am and close at 9am, in other to pave way for the white wedding at 10am. Both traditional marriage, and the white wedding has been called off, by Araba's family.