Video: Peki SHS Headmaster Arrested For doing This To A Pregnant Student.. 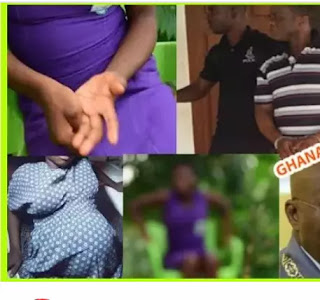 The headmaster of Peki SHS named Amoah Ansong, has gone beyond the rules that bond every headmaster in SHS which has led him into trouble. Elinam, a student of Peki SHS, in an interview with Adom FM disclosed that during the outbreak of corona virus that caused schools to close down, she had an affair with her fiancee and got pregnant; for that matter when schools were open, she went to school with her 3 months pregnancy. When she arrived in school, the headmaster was good to her and even encourage her not worry about the state she found herself in.

She added that base on what the headmaster said, she took him as his father and for that matter he never thought he could do anything bad to her. "One day, the headmaster called me to his premises at the school compound and told me that he has to have affair with me now that am pregnant so that the child will not have any deformity when he is born. He also added that it is mandatory for a pregnant woman to have an affair with her partner when she is pregnant and since my fiancee is not with me in the school, he has to replace him and do it on his behalf.", She stated.

"The headmaster then forced me and slept with me at where he stays at the school compound. He has been doing this to me ever since I went to school and as a result, I started having pains in my lower abdomen. I had to tell my parents since I couldn't continue doing it any longer with him.", she added.

They then reported the headmaster to Peki Police and he was immediately apprenhended by the police for doing such a thing to Elinam.