Spider Whose Bite Can Cause a 4-Hour Long Erection 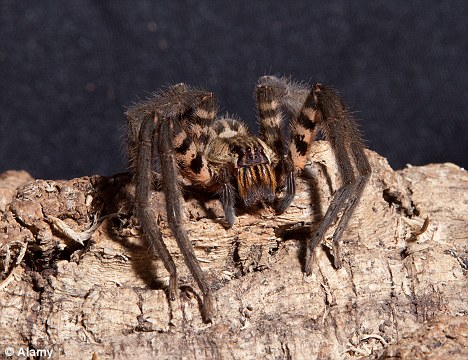 Most people who find a spider in their bedroom quickly try to get rid of it.
But new research shows that one arachnid might actually be best kept by your bedside.
A single bite from the Brazilian wandering spider has been shown to have side-effects including four-hour long erections.

The eight-legged creature - also known as the armed spider, banana spider or Phoneutria nigriventer - is native to South and Central America.

Scientists at the Medical College of Georgia believe the species contains a possible breakthrough for erectile dysfunction.

Dr Kenia Nunes, a physiologist at the college, said: ‘The venom of the Phoneutria nigriventer spider is a very rich mixture of several molecules.

‘These molecules are called toxins, and then we have various toxins in this venom with different activity.

‘Because of this, when a human is bitten by this spider, we can observe many different symptoms including priapism, a condition in which the penis is continually erect.'

Other side-effects on top of the long-painful erections include loss of muscle control, severe pain, difficulty breathing and if its victim is not treated with anti-venom, could lead to death due to oxygen deprivation.

But its unusual effects could be used to treat sexual dysfunction in both men and women, according to Dr. Nunes.

In her study published in the Journal of Sexual Medicine, Dr. Nunes’ experiment managed to give erection-challenged rats with high blood pressure a bit of a boost.

A peptide called PnTx2-6 was given to the flaccid rats, who achieved side-effect free erections.

The spider’s toxin worked in a different way to drugs such as Viagra though and Nunes told MSNBC: ‘This is good because we know that some patients don’t respond to the conventional therapy.

‘This could be an optional treatment for them.’

She is also hopeful that the toxin could help female sexual dysfunction, but has not yet studied this.

The Brazilian wandering spider, which has a leg span of over four inches, has already been found in some American and Canadian supermarkets but is normally found in tropical banana plantations.

According to the curator of arachnids at the University of Washington’s Burke Museum, Rod Crawford, only 10 humans out of 7,000 have died from its bite.